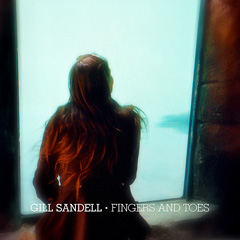 Fingers and Toes is the second single taken from Gill's debut album Tarry Awhile. The song has been revisited and remixed, and adds backing vocals from Jen Macro. On the B side Seventeen Days [Rooms For Sleep] looks ahead to Gill's second album Light The Boats.

A Limited Edition of 500 copies. Heavyweight vinyl in a quality sleeve. Available now through Bandcamp. Ships in 5 days.